This is perhaps the best known name of all the English gardens.

One of the reasons for this is the notoriously irregular life of the poet, writer and gardener, Vita Sackwell West. The other reason is that it is a superb and unique garden. 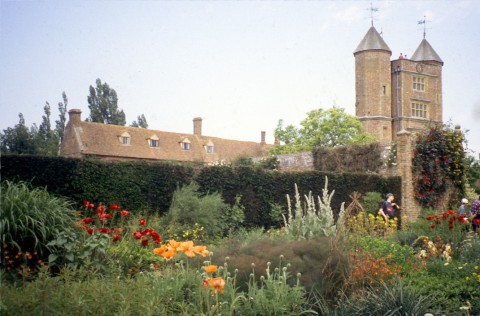 Had Vita been male she would have inherited her childhood home, Knole, which she was devoted to. Because of the strictly male succession rule in the English aristocracy she was passed over causing her much bitterness. However she married a successful diplomat, Sir Harold Nicholson, and together they bought the derelict Sissinghurst Castle and made a magnificent garden there.

In 1930 she wrote “I fell in love; love at first sight. I saw what might be made of it. It was Sleeping Beauty’s garden; but a castle running away into sardines and squalor; a garden crying out for rescue.” On their hands and knees she and Harold began to clear it up. She wrote; “The amount of old plough shares, old cabbage stalks, […] and mountains of sardine tins all muddled up in a tangle of bindweed, nettles and ground elder[…]”. 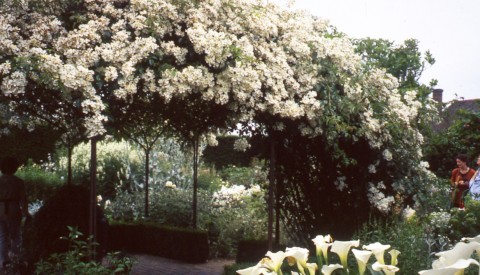 The White Garden with Rosa longicuspa

The Castle has a long history. Of the original building only one section of moat remains behind a ‘new’ 16C castle of which several buildings survive. The best known is the red brick double tower from the top of which one can view the whole garden. In fact the very first thing a garden visitor should do is ascend the spiral stair case, past small windows displaying coloured glass and past Vita’s office where she wrote later in the day having spent the morning gardening. Here one can fix the relationship of the many contrasting ‘garden rooms’ encircling the tower. Harold’s office was in South Cottage by the famous Cottage Garden always planted in “hot” colours, yellow, orange and red. Another famous garden room is the white one, the centre piece a magnificent Rosa longicuspa. The inspiration for this compartmentalised garden came from Hidcote in Gloucestershire where Major Lawrence Johnson had made the first in 1907.

The trouble with these delightful compartment gardens is getting lost.

Flora Garden Tours visit this garden on the Romantic Gardens of Kent, Sussex and Surrey tour.