A special 10 day tour of Yorkshire, Cumbria and the Cotswolds for eight Alaskan gardeners.

Flora Garden Tours’ jokey driver, Alan, met us at the airport and drove us to Waterperry Gardens in Oxfordshire where our, leader and guide, Barbara Sommerville was waiting to greet us. Waterperry was started in 1930 as a school of horticulture for ladies by the redoubtable Beatrice Havergal. The girls did a three year course of hands-on study, constructing and working on the eight acre garden from sun-up to last light. 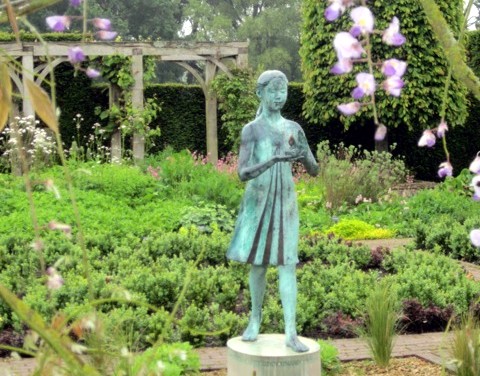 After a delicious home cooked lunch we were off in the air-conditioned mini coach through the countryside patched with brilliant yellow fields of rapeseed and English green to our Cotswold base. Unpacking quickly I take a five minute walk down the lane which leads me to a beautiful church and wide open field. The ancient gravestones have many stories to tell. The inscription marking a head gardener’s grave reads:

The worlds a city full of crooked streets and
Death, the market place where men meet.
If life were merchandise that money could buy
The rich would live and the poor would die. 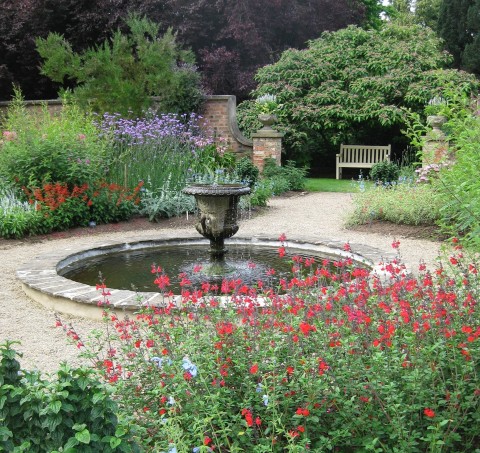 We spend traveling North through the Cotswolds, the Derbyshire Dales and on to Yorkshire to visit Newby Hall Gardens noted for its charming compartment design and holding National Collection of Cornus (dogwood). Driving through the estate we passed hundreds of sheep with lambs. The garden was having its annual plant sale and it would have been great fun to have brought clematis home to Alaska but, sadly, illegal.

As we drive back towards Harrogate we pass many folks enjoying their Sunday off playing cricket, fishing and riding horseback. This is farm country and one expects to see James Herriot just around the corner. We stop at 1500 year old Ripon Cathedral to look at the misericords (the carved shelved seats that the priests could raise up and perch on as they stood through as much as 16 hours of mass a day).

Our first stop is at the Harlow Carr Botanical Gardens just north of Harrogate. It has 46 acres of arboretum and many demonstration gardens. The rhododendrons and azaleas are in full bloom and gorgeous. In one section of the garden there was a tiny village made of the local building stone—millstone grit (the same stone used for grinding stones). The Yorkshire field walls are made of this same millstone grit—a change from the shrub fences we saw yesterday. We visit the Royal Pump Room, the site of the strongest sulphur spring. Several of the group choke down a glass of the cure. I pass! … then north-westwards — ever one to seize a scenic opportunity, our guide, Barbara suggests a stop at the Bolton Abbey which was a priory until Henry VIII closed it. This is a spot to come back to—a spectacular walk down the hill to the river and ruins set in a sweet valley. Motoring on we drive northwest across the Pennine hills which are the backbone of England. Before we take the ferry across the largest lake in Cumbria—Windermere— we visit a beautiful private garden called Matson Ground. It is the first of several Yellow Book gardens opening for charity that we visit. From the ferry we get our first glimpse of the craggy outcrops, mossy oaks and misty mountains of Squirrel Nutkin country.

Our final destination is the charmingly quaint village of Hawkshead associated with the young William Wordsworth and Beatrix Potter. The clematis and wisteria climbing over the ancient whitewashed houses are breathtaking and Ann Tyson’s Cottage and the Sun Inn are homes from home.

Halecat gardens in Witherslack is the first of several we visit today—a day that begins overcast and ends in brilliant sunshine. Our motor-coach wends its way over tiny narrow roads as our guide, Barbara, describes the British way of identifying major and minor roads. An A road is reasonably wide but small country lanes are B s and the more figures that follow, the narrower the road. We were traveling on B5963—a real goat path!

The next stop is at Holker hall where I have a brief chat with Lord Cavendish who was quite gracious to this Alaskan commoner. Tucked out in Barbour gear and wellies, he explained that his lovely lurchers were really carefully bred mongrels. The Italian garden and the water garden which descends in a series of steps over 100 feet were especially spectacular. Later in the day we visit Hill Top, the home of Beatrix Potter which she purchased in 1905 after the sale of her book Peter Rabbit. The house is now run by the National Trust and is kept as though Beatrix herself just stepped around the corner for a bit. What is not so well known about the author of peter Rabbit is that she cultivated Herdwick sheep—a local breed prized for its hard wearing wool. She eventually acquired 4,000 acres of land and many Herdwick sheep—all of which she bequeathed to the National Trust.

We have our first stop at Mathew How in Troutbeck—a series of seven tiny private garden areas owned by Rosemary Griffins and her husband. The garden is a delight with many unexpected whimsies—a sea shell topping off a topiary; white butterfly moths stenciled on a blue garden shed door; glass floats floating on a sea of moss. Rosemary is on hand to greet us and show us around her steep southeast hilly exposure. Her husband maintains that the tiny lawns are "manicured by three ancients—one old man and two antique lawn mowers." (Cumbria Life, June 2001)

Holehird Gardens are next—they are maintained by the Lakeland Horticultural Society, all 10 acres—with the most magnificent views across Lake Windermere. The rock garden and alpine greenhouses with specimen plants in clay pots embedded in sand were particularly outstanding. Then hi-ho and off we go to Levens hall with its pele tower to sound the alarm and notify the valley dwellers of raiding Scots (the Reivers}. The gardens were amazing dominated by massive 400 year old yews. The only surviving Jacobian topiary that takes four gardeners a month to trim. Huge white backlit tulips accentuated the dark green of the yews. Our last Cumbrian garden is nearby Sizergh garden of native stone and a wildflower bank by the lake.

Back in the Cotswolds, our first garden stop is at Hidcote Manor which is maintained by the National Trust. The gardens were originally designed by major Laurence Johnston, an American, who purchased the 300 acre estate in 1907. He began to create the garden from a ten acre field containing just trees. He divided the garden into a series of outdoor rooms using hedges and walls—each having its own unique character. Hidcote Manor is one of England’s great Arts and Crafts gardens and was a huge influence on Vita Sackville Wests’ design for Sissinghurst Castle. During the 1920’s Major Johnston traveled extensively and collected many plants from China and South Africa that he brought back to Hidcote Manor.

From our coach we admire the lovely Cotswold hills and high gabled houses all in local stone. One can still see fields that were ploughed by horses that have maintained their ridge and furrow traces though now permanent pasture… the glow of the houses made of golden limestone… thatched roofs sewn and woven into patterns and covered with wire to keep the birds out… daub and wattle—woven willow with manure, straw and clay used in the past as a plaster covering for the outside of tiny white-washed cottages.

Oxford—Where Lewis Carrol (the Reverend Charles Dodgson) taught mathematics and wrote Alice in Wonderland. He arrived as an undergrad in 1851 and remained at Christ Church for 47 years. The head custodian, Fred, takes us on a special tour. The gnarly Asian plane is the oldest tree in the garden and was probably the inspiration for the Jaberwocky in Alice. The centuries old dining hall was filmed as Hogwarts for the first Harry Potter film — as our guide says, it’s where Harry meets Alice.

There are over 30 colleges in Oxford but we don’t have time to investigate them all —interestingly the Jewish cemetery was outside the medieval wall and since they were not allowed to take their dead through the town there is a little foot-path called Dead Man’s Walk which we use to reach the Botanic Garden — so peaceful. Every time you look up there is a stone face looking down at you—one on St. Edmund Hall, is that of a man and his dog with the inscription:

Beneath this turf the Dean’s dog Fred
Without his master, goes to Earth, stone dead
But on the tower, stone Dean and Fred together
Enjoy the sunshine and endure bad weather

In the afternoon, thanks to Barbara’s flexibility, we decide to visit Bourton-on-the-Hill’s seven open gardens. These are private gardens open on Sunday afternoons as part of the National Garden Schemes. Each is a gem—some quite elegant and formal, most small and charming. Tea at the village school is a welcome finale.

Return to Yorkshire and Northumberland. 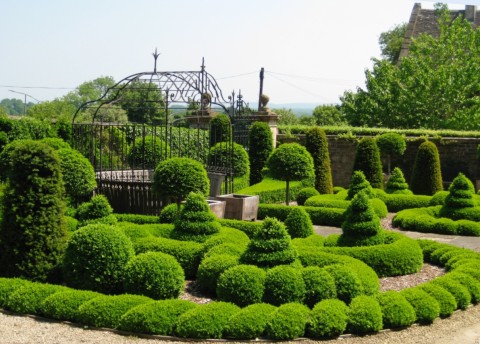